Two Cheltenham gyms are showing their support for Gloucestershire law firm BPE Solicitors’ charity bike ride from Luxembourg to Budapest, by collecting donations at their premises in the town.

Fitness First, located in The Brewery and Fitness4Less in Grosvenor Terrace, where two of the law firm’s team train, will be displaying posters and taking donations to help raise the cyclist’s target of £20,000 for The Footprints Foundation.

Jessica McDonald, Studio and Events Manager at Fitness First commented, “We’ve seen John Workman, who is one of our members, training hard for this challenge and we wish the team all the best – they’re raising money for a fantastic cause.”

Fitness4Less’ General Manager Petya Collins was also keen to show their support, commenting “To cycle 861 miles will require a great amount of stamina and endurance, both physically and mentally, so we wanted to show our support for the team undertaking such a grueling challenge – we’re sure it will be a success!”

Senior Partner John Workman, along with Partners Tim Williams, Jon Close and Chief Operating Officer Adrian Peake will begin their epic bike ride on 13th June. Over ten days they will cycle through five different countries to raise money for the Footprints Foundation, which aims to tackle the problems and issues facing disadvantaged and vulnerable people, as well those with significant health issues.

At the same time, staff back at the law firm’s head office in Cheltenham will be attempting to match the team mile for mile on exercise bikes, loaned by Pure Gym, set up in St James House main reception.

If you would like to donate online, please visit the team’s JustGiving page. 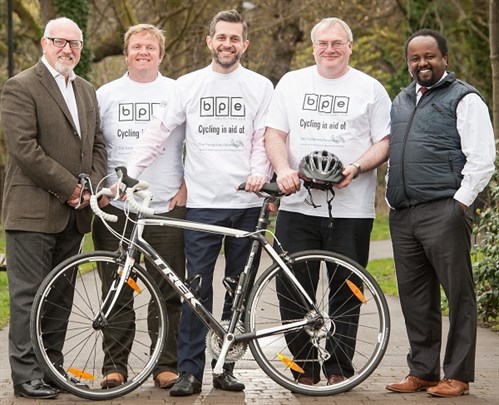