So as some of you may know, those of us not currently peddling our way across Europe refused to be out done in either sporting prowess or charitable good deeds. We therefore decided to match John, Jon, Adrian and Tim “mile for mile” on exercise bikes here at St James House.

Pure Gym have very generously loaned us two exercise bikes (I believe the technical difference between them is that one is a “sitty uppy” and one is a “sitty downy” bike and we have been allowed to set these up in the reception area, much to the amusement of our building manager, Tony, and of the many visitors to the building (we share premises with Gloucestershire Echo so the public visit a lot too). 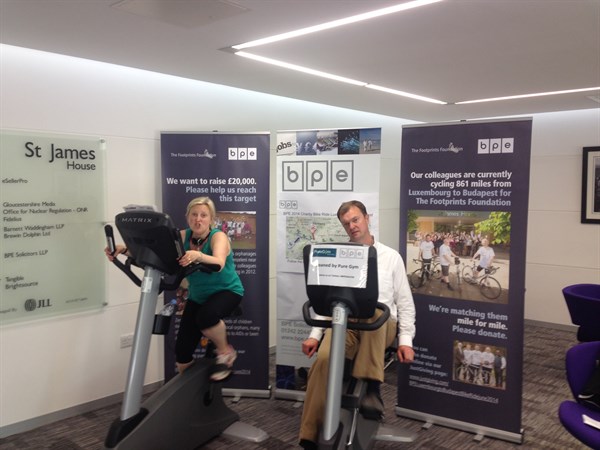 We have split each day into one hour slots keeping the bikes spinning from 8:30am – 5:30pm and we are aiming to average at 17 miles in each slot. Over 40 staff volunteered to take a turn on the bikes with some people signing up for more than one slot.Now that we are at the end of day two, the competitive streak that seems to flow through the DNA of lawyers (and in fact Management Accountants and Archiving Assistants who work in law firms!) has become increasingly apparent! Whilst we are desperately trying to encourage people that genuinely “every little helps”, some are now arranging “head-to-head” competitions and the target of 31km in an hour (that’s 19.2 miles) seems to be one that several are striving for.

17mph might sound like a reasonable pace if you’re the sort who regularly goes to the gym. However, that’s a decent pace for 20-30 minutes of bike work in a mixed cardio/weights session.  Maintaining it for an hour has turned out to be rather hard work. BPE also has some resident “spin” fanatics and when their turn comes around I think they may find that the slightly different set up of a traditional exercise bike vs a spin bike might make it harder than they are expecting.

Day one saw us achieve a fantastic 166.25 miles and on day 2 we have added 158.41 miles. That puts us at the equivalent of having cycled from Luxembourg City to just outside Ingolstadt in two days – even if it is by relay that is still an amazing start! 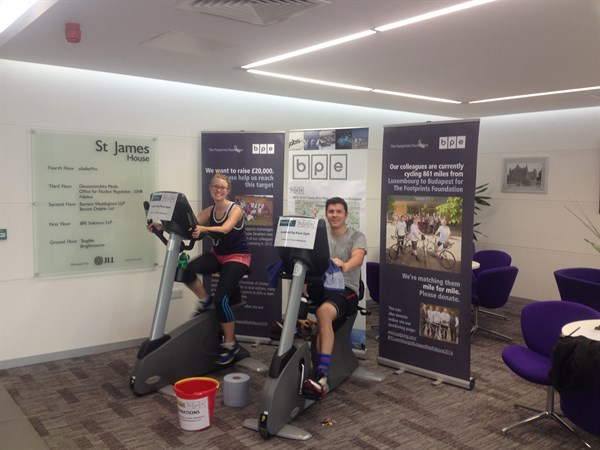 During day two cyclists were also “interrupted” by BBC Radio Gloucestershire and the Gloucestershire Echo, each of whom has kindly covered our fundraising event, which included Anna Wood being interviewed for the radio whilst cycling away. If you click on the attached link and forward to 3:45pm you can hear the interview  http://www.bbc.co.uk/programmes/p020b2hj

Day 3 of the Home Team’s journey should see us overtake the Away Team, although if they keep getting lost and adding miles to their own journey, we’re going to have to peddle further (hang on a minute…. I see what they’re doing!)