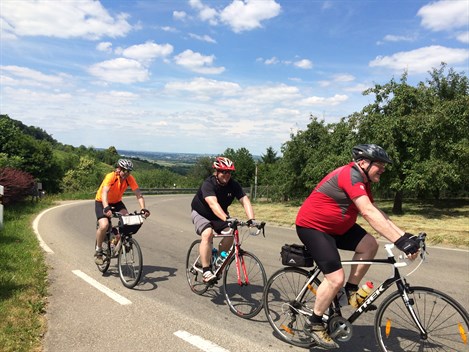 We returned from Budapest on Friday night, having finished the ride on Tuesday afternoon.

As you would probably expect, there are some vivid memories, and a feeling of quiet satisfaction.

We actually managed to fit in six countries – the trip from Luxembourg to Germany goes through about 200 metres of France! We crossed three of Europe’s major rivers (Moselle, Rhine and Danube) and spent time in four capitals (Luxembourg, Bratislava, Vienna and Budapest).

We had some misadventures – I joined the Southern German scenery 40 miles down the Danube from Ingolstadt – a patch of gravel causing a high speed somersault and a less than happy landing on the path, resulting in a right knee like a lunar landscape, bruised ribs and pride. My trusty bicycle fared worse, not least because Jon Close couldn’t stop and rode straight over it!

By the way, Jon ended up in the opposite hedge but fortunately landed on his head.

We regrouped, I hired “BERTHA” a German tourist “sit up and beg” rental bike and did the last 330 miles on that. Built for comfort not speed, weighing more than all the other bikes (and possibly the Land Rover) put together BERTHA got me though. As I have said elsewhere, a bike with soul!

We did hills – 100 miles from Bretten to Ulm “round” the Black Forest – so called because the trees hide the mountains.

We made an important discovery for those who follow in our footsteps (or should that be pedal steps?). In Southern Germany, “cycle path” means “maze”.  The fact that the shortest distance between two points is a straight line has clearly eluded someone in town planning.

We did beautiful Southern German towns, the Wachau Valley and much other lovely real estate.

We watched quite a lot of good football in the evenings – mainly since we didn’t see England play.

We saw eagles, storks and various bits of exotic roadkill.

Our encounter with an Austrian landlady made Basil Fawlty look like Harrods Customer Services.

We also went to the Mauthausen Concentration Camp - about which I will not write.

Massive thanks go to Footprints for their organisational support – particularly Bob Holt (co-chief support driver and logistics technician): Anteneh Tekleab, who drove us from Budapest to Cheltenham from Thursday morning to Friday evening with the Land Rover coughing blood…. And last, but not least Jane Tappenden who did most of the clever bits of the organisation with our own, our very own Adrian Peake.

Thanks, then, to Adrian for organisation, leadership and, despite insuperable odds, navigation. How hard it can be to follow a river, you say? We are ideally placed to tell you!

Of course the biggest thanks to those who have supported this worthy cause – or have yet to do so. We have raised just under £10,000 at the moment – we would like to raise more and therefore  unashamedly ask you again to remember the orphans at Zenzeleni.

You can make all donations here 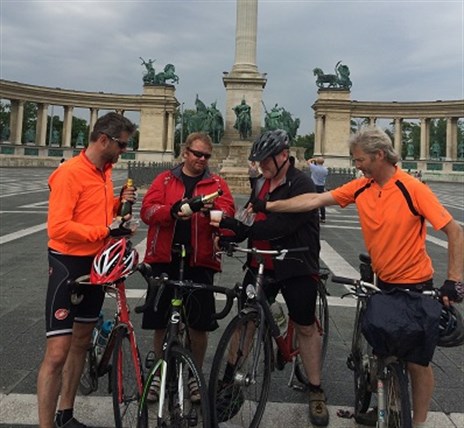