After almost 1,000 miles and a combined ascent of approximately 23,000 meters – and descent of 24,000 meters, John Workman, Managing Partner, cycled into Santiago de Compostela, Spain. Here, John shares, in his inimitable style, the highs and lows of this epic adventure.

The 13 day trip included two days with a temperature of more than 40 degrees, but only one hour of rain, and as the saying goes, the rain in Spain falls mainly on the Plain… well it did on us; the North West Plains of Spain to be precise.

The Route
We started in front of the cathedral of Le Puy-en-Velay, approximately 100 miles north of Montpellier, France, and followed the pilgrimage route of St. James, which ends at the cathedral of Santiago de Compostela in North West Spain – the believed final resting place of Saint James. Appropriately enough, BPE’s head office is located in St. James’ House, and just a few miles north is St. James the Great Church, in Stoke Orchard which sits on one of the centuries-old Pilgrimage routes to Santiago.

Auspicious or simply coincidental, once the cycling began, all thoughts of the office in Cheltenham were left behind.

The ride reaches its highest point at 5,000 feet above sea level, after a gruelling 17 mile climb. Perhaps unsurprisingly, there is a large cross at the summit where many pilgrims leave a stone on a cairn, symbolic of casting away their sins or their burdens. Once that has been successfully completed, there follows a near-suicidal downhill with hairpin bends and an incredibly long drop. Whether you ever walk or cycle this route, I advise you not to look down at this point.

That 17 mile climb though, is not the longest to be encountered. You can imagine my joy when faced – the very next day – with a 20 mile climb. But neither of these was the hardest for me. Personally, I found the mere 15 mile climb over the Pyranees to Roncesvalles the most challenging... partly due to my pedal breaking at the 12 mile point. If there is a Guinness record for the most rude words used during three miles of cycling with one foot up a mountain in very hot weather, I claim it!

Of course there were also many highlights from such a trip. ‘Bonking’ in Condom wasn’t one of them. I should clarify, for the uninitiated, ‘bonking’ is what happens when your body runs out of energy and your legs turn to rubber. This happened to me in a town called Condom. How we laughed…. more accurately how Tim Williams and Anteneh (our driver), laughed.

An extraordinary team
Speaking of whom, I must offer my most sincere thanks. Tim stepped in literally at the last minute when my usual collaborator Adrian Peake (deliberately) contracted gastroenteritis. While Tim may be 20 years younger, much prettier and much fitter than I am (or ever was) he had done absolutely no training for this. But without his partnership, I am not sure I would have made it to day 10, so thank you Tim.

Sadly he had to leave on day 10 and missed the last three days. I have genuinely never seen anyone so reluctant to go on a beach holiday in Croatia! But I really mean it. Without him I would not have made it.

And as for Anteneh, he is well used to ‘BPE Tours’ having now supported three of them, and if he ever gives up on professional driving for a living, he has a great future as a sandwich maker. Again, his support and comradeship throughout the ride, particularly in the last few days, was beyond words, and he also receives my heartfelt thanks.

As for the ride itself – there are bits I would recommend and bits I would pay money not to have to do again – strangely enough, the hills were fine. The mind-numbing boredom of cycling across the North West Spanish Plains (“Meteseta”) is firmly on the “no thanks” list. Even the Rioja bit is worthy but dull.

The fellowship among pilgrims of all ages, shapes and sizes, including at least one in a wheelchair, is a massive encouragement. Apparently 2,000 travellers arrive in Santiago every day during August. “Bon Camino” is yelled out cheerfully by people from every continent, every branch of the Christian Church, and by people who hold allegiance to none.

Hats off, ladies and gentlemen, to those who choose to walk the route. That, I couldn’t do.

Mission accomplished
Of course, this was a cycle challenge, not a pilgrimage – although we started at the Cathedral in Le Puy-en-Velay and finished at the Cathedral in Santiago. Apart from the side effects of losing some 10 pounds in weight, building some muscle and increasing my stamina, the objective of the challenge was to raise money for the worthy Footprints Foundation. My target was £2,000 and I have already raised that.

All contributions go straight to the charity as, thanks to the generosity of my Partners, and the fact that I am meeting my own expenses to go to South Africa in October for the charity, every penny raised is free and clear. I want to thank all those who have already donated so generously. If you haven’t – and you still want to – the link is below… No pressure.

And one final “thank you”. Some of you know – or know of – Bob Holt, perhaps best known as Chief Executive / Chairman of Mears Group over the last 20 years. The Footprints Foundation is the charity he founded to support orphans after seeing the need for such support in South Africa, and he provided both Anteneh, (our driver) and the support vehicle at his own expense to support the trip.

Other than 20 years of Corporate transactions together, one of the things we have in common is a desire to give back – and I thank him for his support on this as in so many things.

As they say at Warner Brothers “That’s All, Folks….”

Until next time, at least. 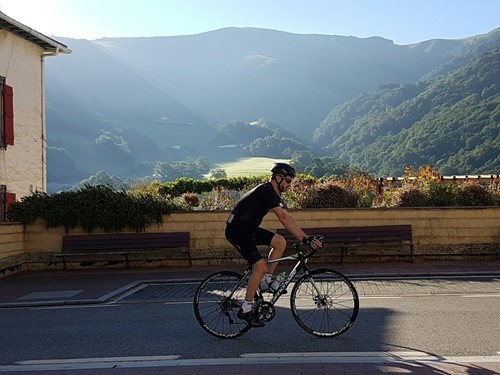