As part of the annual increase to National Minimum Wage, the following increases took effect from 1 October 2016. The National Living Wage, introduced in April 2016, is not due to increase. 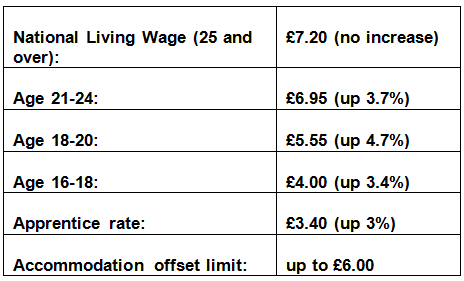 The Government have confirmed that 2016 will be the final year for October increases with any subsequent changes being on 1 April from 2017 onwards. This will bring dates for both the National Minimum Wage and National Living Wage in line and will eradicate any confusion going forward.

If you pay your workers minimum wage, this month’s rate increase will mean increased overheads which should be planned for in advance. Given that a further increase is likely in April 2017, businesses should budget for a higher overall salary overhead in the 2017 tax year than may have been expected before the changes came into force.

Compliance with National Minimum Wage/Living Wage is now more important than ever.  Employers face a fine of up to £20,000 for every employee found to have not received the correct rate of pay. In addition, a public naming and shaming exercise is currently under operation by HMRC which can lead to adverse publicity for a business.

Ensure that your payroll information is updated with the new rates of pay. You may also want to double check employees’ birthdays and whether any employees have been bumped up a NMW bracket as a result of a recent birthday.

For information on the most common mistakes employers make on minimum wage please see last month’s blog on the topic: http://www.bpe.co.uk/why-bpe/blog/2016/09/minimum-wage-why-are-employers-getting-it-wrong/