A leading Gloucestershire law firm has appointed a new Business Director following a successful year of growth in an unpredictable market.

BPE Solicitors, which has offices in Cheltenham and Stroud, has continued to thrive despite the uncertainty in 2016, increasing its multi-million-pound turnover for the 7th successive year.

The past year has also seen the Cheltenham law firm rank highly in The Legal 500 for multiple sectors, including Corporate, Family and Employment, with a number of partners also named personally in the results.

John Workman, Senior Partner at BPE, commented: “2016 was a fantastic year for BPE. We’ve welcomed some very talented people to the team, completed numerous deals for clients, conquered another cycling challenge for charity and launched our Brilliance programme of events to celebrate the extraordinary achievements and diverse talents that exist within the Cotswolds. In uncertain times, the BPE team has helped clients to prepare for change, and as a business, we have welcomed the chance to review our own plans for the years ahead.”

Newly appointed Business Director, Paul Browne, hopes to continue this success. With a background in strategic planning in the financial sector, Paul worked for the likes of Barclays, Standard Chartered Bank and KPMG before making the move to business management at legal firms including Allen & Overy, Pinsent Masons and Winckworth Sherwood.

With a career spanning more than 30 years, Paul plans to use his experience to continue BPE’s growth. “BPE is undoubtedly a different law firm,” Paul said. “It has a fantastic culture of change and innovation, and this is something I want to drive forward in 2017 and beyond. My aim is to help implement a long-term strategy to see the business grow in size and strength, become more profitable and build on its distinctive culture. I’m delighted to have taken on this new role and look forward to what the coming years will bring for BPE.”

John Workman added: “It’s been a pleasure to welcome Paul to the team. His vision fits right in with what we want for BPE, and I’m more than confident that with Paul on board, we will continue to thrive.” 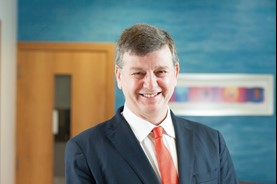