Step-In Rights (‘SIR’s’) allow one party in a construction project to effectively ‘step-in’ to the shoes of another party. If drafted properly, the various construction documents surrounding the project (consultant appointments, main contract and sub-contracts, collateral warranties) should continue to have full legal force save for a change of party name, with building work continuing as before.

A typical construction project management structure is below, including the three most common types of SIR. Bear in mind that not all projects will have a funder and some may have multiple funders. Additionally, some projects may have more than one contractor. 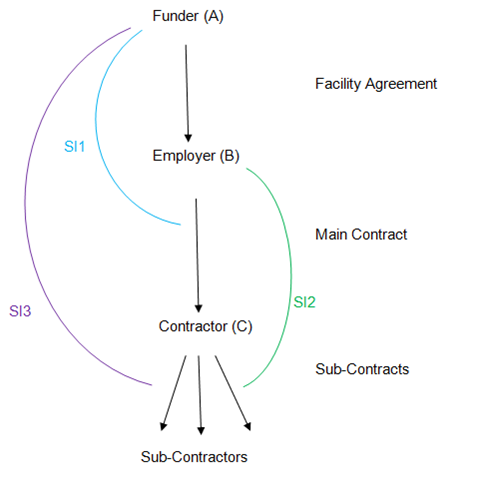 Why are they used?

The primary reason for SIR’s is continuity in the face of employer or contractor insolvency. The main assets in any construction project are the site and works (however complete works are), any loan money remaining, materials on site and the professional team currently engaged. Those exercising SIR’s will want as much value preserved as possible. The best way to do this is to ensure that SIR’s can be exercised quickly without protracted remobilisation or disputes. Sub-Contractors will need to be paid, materials available for use and site works continuing is the goal.

What scenarios are they designed to be used for, and how does this work in practice?

SIR’s are used as an emergency mechanism should a party become insolvent (see below).

Using the three scenarios in the above diagram:

In situation SI1, A will have the ability to Step-In if B goes insolvent or is not complying with the Facility Agreement. A can then continue in B’s shoes, and preserve the project value as outlined above. B will want a notice requirement in the Facility Agreement (as well as a clear definition of insolvency) before A can Step-In, as this provides some protection of B’s investment by preventing A stepping in without notice and without reason.

In situation SI2, B may Step-In if C goes insolvent or is in breach of the Main Contract. B is then free to continue in C’s shoes or (as is often the case) novate Sub-Contractor appointments to a new Contractor to preserve the project value as outlined above. C will want a notice requirement in the Main Contract (as well as a clear definition of insolvency) before B can Step-In, as this provides some protection of C’s commitment of resources and anticipated profit by preventing B stepping in without notice and without reason.

Situation SI3 is only likely occur if B and C go insolvent and/or breach their respective agreements. A will seldom want to Step-In to C’s shoes, so if at all possible will make B Step-In first. Note that this is the only scenario in which SIR’s can be forced upon a beneficiary, in all other scenarios SIR’s are an option which only the beneficiary can choose to exercise.

Funders are often cautious about SI3, because if A exercises SI3 and takes on the role of interim project manager, it is possible that A will be liable to the B (the Stepped-Over party) if the project is poorly managed. A will require that SI3 takes priority over SI2, so that if the Funder needs to take action to preserve the money it has advanced it can do so. The ranking of SIR’s can be set out in the Step-In clause or in Deeds of Priority as between lenders/funders.

SIR’s appear in collateral warranties, direct agreements and third party rights clauses/schedules. If you would like to read more about these documents, these Construction Team articles on Third Party Rights and ‘No Greater Liability’ clauses discuss their use in practice.

What are the risks for Contractors and Sub-Contractors?

In all situations the Contractor/Sub-Contractor has two elements of risk.

Firstly, SIR’s are often accompanied by a provision which prevents a party from suspending work for a period of time after giving a notice to the Contractor/Employer, to allow the Employer/Funder to Step-In if they wish to. For example, in an unamended JCT Design & Build 2016 the Contractor must copy notices to the Funder and also wait 14 days from any notice of termination or suspension given to the Employer before suspending or terminating. Threatening suspension is often the only way for a small sub-contractor who has not been paid to make any impact on the Contractor/Employer.

Secondly, because the contractor has no rights against the beneficiary until Step-In SIR’s cannot be used as a ‘guarantor provision’ to ensure payment from a solvent party further up the chain. However, if a party does choose to Step-In then (under the JCT D&B) then they accept liability to pay sums due by the original party under the contract.

Whilst these two risks are legitimate reasons for a contractor to push back on SIR’s, a contractor unwilling to work on bank-funded projects with SIR’s present may find themselves short on work. During the risk review of any contract, contractors who will be subject to SIR’s would do well to consider not only the position of the party employing them but also any party who may subsequently Step-In to the contract, as once a contract with SIR’s has been signed the beneficiary may well become the Warrantor’s employee.