The Commercial Property team of the Top 200 law firm invited guests from a number of local and regional businesses, including banking groups, architects, accountants, financial advisors and surveyors to battle it out in order to take home the coveted ’Nosh and Becks’ trophy.  The event was hosted by Antonia Shield, Equity Partner and Jo Bewley, Propety Partner at BPE; with Jo later on joining fellow Property Partner, Doug Armstrong, in forming a BPE team.

The fast-paced evening started with the group stages, followed by the top four teams taking part in two semi-finals. The grand final and third place play-off games rounded the evening off. Antonia presented the medals and winner’s trophy with team Pepsi and Shirley from Integrated Architecture bagging first place. Coombes Everitt Architects came second and The Dark Horses from Lloyds were third.

John Workman, Senior Partner at BPE, commented: “These kind of events are an opportunity for us to have some fun but also cement and add to our commercial property network. We’d like to thank everyone who came along and made the evening such a success. We’re already looking forward to next year’s event.” 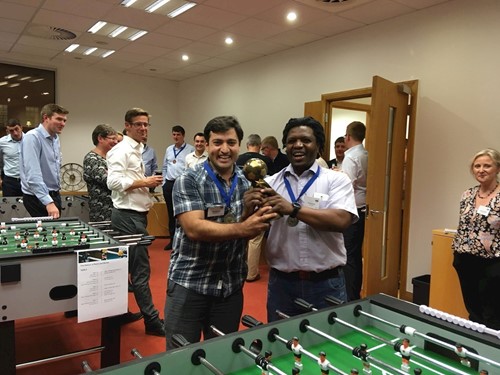