Yesterday we had the pleasure of welcoming Gloucester Rugby Club Captain, Willi Heinz, to our Cheltenham office.

As official Business Partners of Gloucester Rugby Club this season BPE is the exclusive team sheet sponsor and, as part of this partnership, we were delighted that the team captain was able to visit our offices.

After a meet and greet with several members of the team over coffee, Willi was given a tour of the office to find out more about the type of work BPE does.  He was also able to talk to some of the more ardent Gloucester supporters around the office, signing balls and photos for some (no doubt very excited!) younger fans at home.

After the tour, Willi met with Senior Partner, John Workman, to present the signed team sheet from the second home match of the 2018-2019 season against Bristol Bears, a match that saw Gloucester win 35-13.

Gloucester have made a great start to the season, currently sitting third in the Gallagher Premier League table and the next couple of weeks sees two visits to Sandy Park to face top of the table Exeter Chiefs as well as a local derby against Worcester Warriors.  Keep an eye out for the team sheet on social media or when you next head to Kingsholm and we’ve got everything crossed that Gloucester’s current run of form continues... 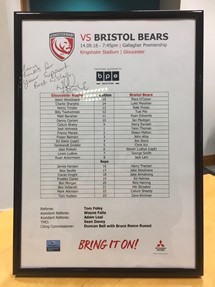 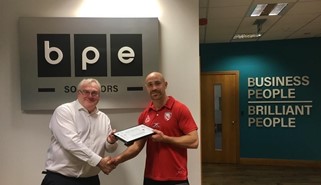