After successfully completing the 297 mile Macmillan Way in July 2017 accompanied by a host of colleagues, earlier this month Rob was joined by BPE consultant, John Russell, to take on the challenge of completing the 102 mile Cotswold Way in just six days.

With the fundraising total at £45,000, thanks to the pair’s efforts they were able to add another £5,000. All the money raised will go towards helping fund the recruitment, training and employment of an additional Macmillan nurse in Gloucestershire for a year.

Over the past two years, the whole BPE team has got stuck in to help with the fundraising effort which has included sponsored walks, a static bike challenge, a golf day and cake sales.

John Workman, BPE Senior Partner, says: “We’ve always been a passionate supporter of charities but this has been by far the most ambitious fundraising total we’ve ever set out to achieve. We’re absolutely delighted to have raised such a factastic amount for Macmillan and it’s testament to the hard work of everyone involved throughout the whole BPE team.

“We’re extremely grateful for the support we’ve received and would like to thank everyone who made a donation.”

While most people know someone affected by cancer, Rob was the driving force behind the partnership having experienced first hand the dedicated care and support of Macmillan nurses when both his mother and a close friend received care from the charity. “Yes, cancer is a disease that we are fighting but it’s still something which impacts the lives of far too many people,” says Rob.

“This is true whether you’re a cancer patient or a loved one supporting them through treatment and Macmillan Nurses are trained to be able to offer the help and support needed for everyone that’s affected. I know just how crucial this can be and I’m thrilled that our fundraising efforts will make a difference to families like mine. Our fundraising won’t come to a close until the 31st December so if you’d like to make a final donation you can text BPEW54 followed by your amount to 70070.”

There are currently more than 4,500 Macmillan nurse posts across the UK, both in hospitals and in the community, each caring, on average, for 168 patients. Sadly, almost 1,000 new cases of cancer are diagnosed every day in the UK creating a requirement for more of these specialists. As specialists, Macmillan nurses assess complex needs, give advice to other healthcare professionals and support people with cancer to understand their treatment options.

Macmillan has to meet the entire training and employment costs of a nurse’s first year of employment, which is close to £54,000.

For more information about the money raised or to make a final donation, please visit www.justgiving.com/fundraising/macmillanwaychallenge or text BPEW54 followed by your amount to 70070. 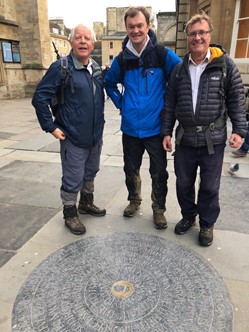