A new fundraising partnership between BPE Solicitors and Winston’s Wish has been unveiled.

The Top 200 law firm will be aiming to raise as much money as possible throughout 2019 for the Cheltenham-based charity that provides help and support to bereaved children and young people.

Staff were asked to nominate charities before a vote took place to decide BPE’s new charity of the year. Fundraising activities will be focused around the theme of ‘One Day at a Time’ with the aim of highlighting the cost of running Winston’s Wish for a day.

“The whole team is excited about supporting Winston’s Wish over the next twelve months and are already looking at ways they can take part in fundraising,” said BPE’s Deputy Senior Partner, Antonia Shield. “Choosing a charity partner is very important to us as a firm and we like to involve staff in the decision. It’s great that a charity with a national reach doing such important work to help bereaved children is on our doorstep here in Cheltenham.

“We’ve already got lots of ideas for events and activities that we will reveal throughout the year, and we are also looking at other ways we can support Winston’s Wish, such as volunteering.”

“To have BPE come on board as a corporate charity partner is fantastic and we’re really looking forward to working with them in the coming year,” commented Paul Moore, Head of Corporate Partnerships at Winston’s Wish. “It costs £2.5 million every year so that we can continue to provide vital support to children who have lost a parent or sibling and the support from businesses plays a crucial role in helping us to reach this target.”

Winston's Wish was the UK’s first childhood bereavement charity and has been supporting bereaved children since 1992. It continues to lead the way in providing specialist child bereavement support services across the UK, including in-depth therapeutic help in individual, group and residential settings. 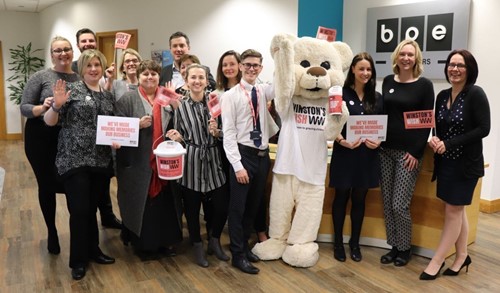