Following the recent promotion of Antonia Shield to Managing Partner, BPE Solicitors is delighted to announce a new Head of Property Services as well as a trio of other promotions throughout the firm.

Jo Bewley will become Head of Property Services, leading the 29 strong BPE Property team which advises clients on both commercial and residential property matters. Jo, who joined BPE as a Partner in 2011, has been Commercial Property Team Leader for the last six years and is now relishing the challenge of overseeing all of the firm’s property teams. She has also been involved with trainee recruitment since joining the firm and will be appointed as Training Principle with effect from October 2019.

Jo commented: “I’ve always enjoyed the management and leadership elements of my role, so I’m thrilled to be appointed Head of Property Services. The Property team is the largest of all the departments within the firm in terms of people and boasts an impressive client base.

“I’m also extremely pleased to be taking a lead in the supervision of our trainees. Trainees are our future and the support and experience we provide them with during their training contract forms the basis for their ongoing legal careers. I’m looking forward to getting stuck in with both these new roles and helping to push the firm forward.”

Continuing the promotions, Dianne Devlin, Peter Knibbs and Angharad Doyle have all been promoted to Associate Solicitor.

Dianne joined BPE in 2017. She previously worked as a computer programmer and IT consultant in the financial services sector and her work within the firm has a focus on IT and Technology.

Peter trained as a Barrister before qualifying as a Solicitor in 2013. He works in the Litigation team specialising in property disputes and also advises on professional negligence claims and data breaches.

Angharad joined BPE as a trainee in 2013 and since qualifying has been part of the firm’s Corporate team, advising clients on company restructures, acquisitions, share schemes and public company work.

John Workman, Senior Partner at BPE Solicitors, commented: “Jo was always at the forefront of our minds when it came to finding a successor for the position of Head of Property Services, following Antonia’s promotion to Managing Partner. Having worked alongside Jo for many years now, it was a no-brainer to harness her leadership skill and depth of experience.

“The promotions of Dianne, Peter and Angharad demonstrate the breadth of talent, character and commercial expertise we have here at BPE. Their 100% commitment to our clients and their teams makes each of them worthy of recognition. They are all playing a pivotal part in the continued success of BPE as a whole and I’m always delighted to see potential in our firm realised.” 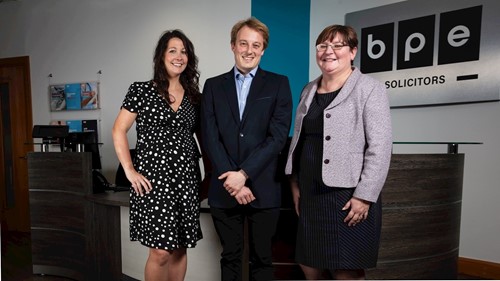