Emily Barwell has qualified as a Solicitor in the Science & Technology team at law firm BPE Solicitors.

Emily, who joined the firm as a trainee in 2017, developed a keen interest in technology during her training contract and has worked alongside the Science & Technology team on a number of significant projects.

Emily has a professional interest in fast evolving areas such as artificial intelligence, data and robotics. She is developing an expertise in information law and has advised on areas such as: data protection; electronic communications; freedom of information; the NIS regulations and intellectual property. She has presented on the transparency requirements for systems using automated decision making and is involved with the Society for Computers and Law and the West of England Robotics Network. Emily is also a member of an IEEE Standards working group working to produce a standard on the trasparency and accountability requirements of the development of both physical and non-physical autonomous systems.

Rob Bryan, Head of Science & Technology at BPE Solicitors, commented: “I am delighted that Emily expressed her interest in qualifying into the Science & Technology team. During her time with us she has shown a clear aptitude and enthusiasm for the sector and I’m really pleased that we are able to offer her a permanent role in the team.”

Having recently completed a research project for the Open Data Institute (ODI) in relation to the concept of data trusts, the Science & Technology team at BPE Solicitors is running a series of legal briefings for local authorities in May to explain how they can be used by public bodies. The events will take place in Cheltenham (1st May), Bristol (9th May) and Exeter (15th May).  Places are limited so if you would like more information or to attend on of these events, please contact Rachel Williams on 01242 224433 or email bpe@bpe.co.uk. 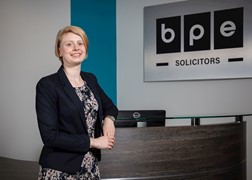