The matter has come up again most recently in Mears Limited -v- Costplan Services (South East) Limited and Others [2018] which related to the interaction between an Agreement for Lease and the certification of Practical Completion under a building contract. As in most AFLs, the right to occupy and therefore the obligation to enter the lease and pay rent (or at least start the clock ticking on the rent-free period) was triggered by the certification of Practical Completion.  The prospective landlord (and Employer under the building contract) was Plymouth (Notte Street) Limited (“PNSL”).  This is not, by any stretch, the first time that there has been a disagreement over whether or not practical completion has been achieved in a manner compliant with the AFL.

The building contract itself concerned the design and construction of two blocks of student accommodation in Plymouth. Once the works were purportedly finished, it was found that 56 of the 348 bedrooms were more than 3% smaller than the size required in both the building contract and, by association, the AFL.  The 3% tolerance limit was recorded in the AFL and Mears’ case was that any failure to meet the 3% tolerance was a “material and substantial breach” of the AFL, meaning that the Employer’s Agent could not validly certify PC, thus entitling Mears to determine the AFL.

The first instance decision in this case was handed down in December 2018 and the claimant’s (Mears) appeal was dismissed a few weeks ago on 29 March 2019.

In summary, the Court found that a failure to meet the 3% tolerance did not automatically amount to a material breach of contract.  Lord Justice Coulson noted that whether or not the breach of the 3% tolerance was “trifling” (see below) was not a subject of the appeal, although the Court did consider the law on that point anyway.  Accordingly, Mears was not entitled to determine the AFL.

Between them, the TCC and the Court of Appeal have given guidance on two really important points over the course of this case and the remainder of this article looks at both.

The interaction between the building contract and the AFL

The AFL included key terms that can be summarised as:

It was common ground that the practical completion certificate issued under the building contract would have a triggering effect under the AFL.

Mears argued that if the building had been constructed in such a way that there was an irremediable breach of the 3% tolerance requirement, that must mean that the works could not be practically complete. The Court considered the breach of the 3% tolerance requirement: both the extent of the variation and the extent of the breach.  In the TCC, Judge Waksman had noted that there was a range of extent of breaches of a clause – from ‘de minimis’ to ‘material’ with various levels in between: a breach could be more than ‘de minimis’ and yet still not ‘material’.  The Court of Appeal interpreted the AFL wording as focussing on a material variation in room size, rather than suggesting that a variation in room size would be a material breach.  Lord Justice Coulson accepted PNSL’s contention that the AFL was not phrased such that any breach of the 3% tolerance was a material breach, allowing Mears to determine the AFL.   He went further and suggested that such a result would be “draconian”.

The Court therefore considered that the ordinary test for practical completion applied.

How should practical completion be assessed?

For certifiers (usually architects or surveyors) this is something on which they are trained extensively and in which they gain experience over time. Clients, however, are often surprised by what does and doesn’t constitute ‘practically complete’.  It is important for employers to appreciate that buildings are different from products and the law treats them differently.  As noted in Emson Eastern Limited (in receivership) -v- EME Developments Limited [1991] “…it is virtually impossible to achieve the same degree of perfection as can a manufacturer. It must be a rare new building in which every screw and every brush of paint is absolutely correct.”

So if we know that ‘practical completion’ is not ‘perfection’, what is it? How is it defined?  Well the country’s foremost legal commentators and judges either struggle, or more likely deliberately choose not to, attempt a definitive definition.  Practical completion is, so it appears, much like a dog, easier to identify than to define.

The Court of Appeal, via the leading judgment of Lord Justice Coulson, took the opportunity to summarise the case law history on the definition of practical completion. The key points to note are:

We have turned these tests into a flowchart, but emphasise that there are many alternative configurations possible for this and there will always be exceptions. This diagram is not intended to accurately mimic the NEC/NEC4 style of flowcharts but is our visual representation of the Court of Appeal’s summary of the caselaw. 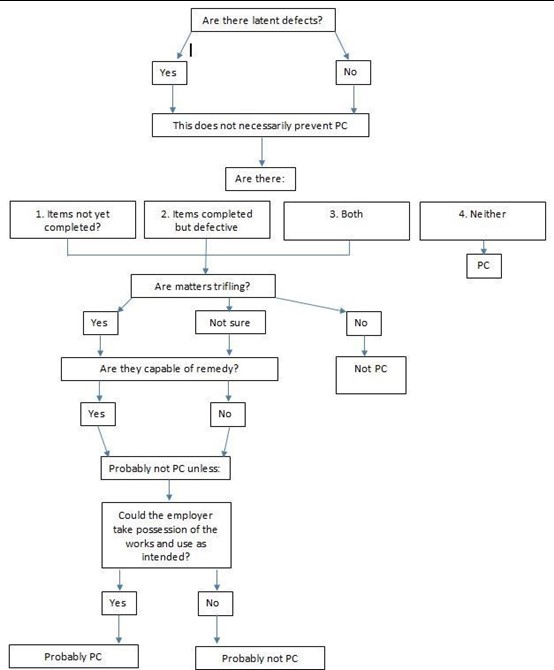 So what should Clients/Employers do to ensure that practical completion for their project means what they want it to mean, and how should this be linked to the AFL?

Firstly, when drafting or negotiating the building contract bear in mind that any wild departures from the common law position are not likely to be accepted by contractors.

Secondly, it’s important to remember that how strict you feel about the requirements for practical completion can change over time; if the project is delayed or varied, or if your business needs change during the course of the works.

Thirdly, being prescriptive is not always the best way but if there are specific requirements that would prevent your use of the completed works as intended, it is important to state these clearly in the building contract. Certain requirements may be obvious: a building control certificate, lifts and fire alarms fully commissioned etc.  Other requirements may be more subtle: e.g., the difference between the completed works being capable of being used as a restaurant generally or meeting the precise requirements of the franchise/brand of restaurant that the client intends to operate.  Consider also funding requirements: if, for example, your lender requires the works to achieve a particular BREEAM  rating or requires a full set of collateral warranties, then consider making this a condition precedent to practical completion.