An Enterprise Challenge launched by BPE Solicitors in May has raised £1,600 for the firm’s charity of the year, Winston’s Wish.

Teams from across Gloucestershire and Bristol were each given a £50 seed fund with the task of turning it into as much money as possible. Putting their entrepreneurial skills to the test, the teams, which included BPE employees, clients and suppliers, organised events including a car wash, a tuck shop and a quiz night.

Another team sold the ingredients needed to cook a roast dinner to encourage families to come together for a meal.

The overall winner of the challenge was ‘Kelly’s Eye’ who organised a raffle and bingo night at their local pub and raised an impressive £700!

The prize for the most innovative idea went to ‘Rainmakers’ who created a wishing well for people to drop messages of positivity into, which would later be used to stuff teddy bears and given to children. The messages could then be taken out and read if the child was feeling down.

Paul Moore, Head of Corporate Partnerships at Winston’s Wish said, “This was a fantastic way to get businesses across the region involved in fundraising for Winston’s Wish. We’re really impressed by the effort and creativity the teams put into this challenge and, as a direct result of the money raised, we will be able to provide support to a bereaved child for a whole year.”

Philip Radford, BPE Equity Partner and member of the Winston’s Wish South West Corporate Development Board, said, “This was a wonderful challenge that the teams fully embraced. I was delighted to see the effort that was made and I’m pleased that so many people gave up their time to be involved.” 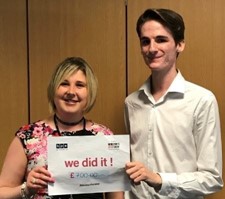 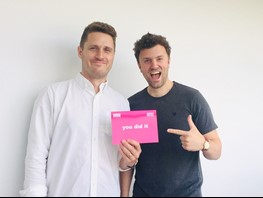 (L-R) Kelly Field and Lewis Adkins who joined together to form the 'Kelly's Eye' team and won the Enterprise Challenge.

David Drakely of Bitter Lemon Creative and Nik Venios of THEIA who joined together to form the ‘Rainmakers’ team and won the prize for ‘Most Innovative Idea’ as part of the Enterprise Challenge.