Following a year of fundraising and challenges for Winston’s Wish, BPE Solicitors is delighted to be donating over £12,000 to the Cheltenham-based childhood bereavement charity.

Following a staff vote, Winston’s Wish was selected to be BPE’s charity partner of 2019. During the 12 months, BPE ran an Enterprise Challenge and a golf day, as well as holding bake sales and flipping pancakes, all with the aim of raising money for Winston’s Wish.

The partnership culminated in a ‘week of giving’ in December with the BPE team supporting Winston’s Wish by sponsoring a star, organising a festive bake sale, decorating their Christmas tree and of course, wearing Christmas jumpers.

The money donated to Winston’s Wish will allow a professional practitioner to support 10 children for one year, helping them to cope with their grief and learn how to face the future with confidence and hope.

On the charity partnership, BPE’s Senior Partner, John Workman said: “I’m incredibly proud and impressed by the effort that the BPE team has put in to making this partnership a success.

"The loss of a close family member is one of the hardest things a child will ever experience and the work Winston’s Wish does both locally and nationally makes a huge difference to so many grieving families.  We’re delighted that the money we are able to donate will support this wonderful charity in its valuable work."

Head of Corporate Partnerships at Winston’s Wish, Paul Moore, commented: “We’re so grateful to BPE for the effort they have put into raising awareness of our charity in Gloucestershire during 2019. Their donation will really help the families we support and make a difference in helping the children to cope with the grief they have experienced and create a positive future." 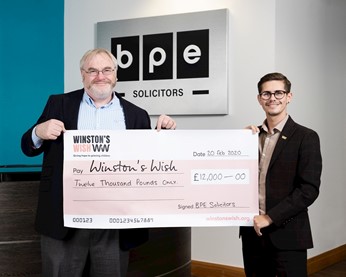